How I got suckered into founding a charity for Veterans

My dear friend Jan Bates, in the front row, far left along with her husband Fred, were the driving force behind the creation of The Secrets of Radar Museum.

Long time readers may recall that November holds a special place in my heart, as I am one of the founders of a very special charity, The Secrets of Radar Museum. During WWII, over 6000 Canadians were recruited from all walks of life and put on a project more secret than the search for the atomic bomb. They were sent all around the world, and couldn’t talk about their experiences until the Official Secrets Act was lifted in 1991. It’s an incredible story – as is the tale of the founding of the museum.

Getting hitched to a museum

In the late 1990’s, before we married, Bridget and I were living across the hall from one another in an apartment building on Proudfoot Lane here in London. Our landlord was … interesting … to say the least.  A few of us in the building got together to form a tenants-rights group to keep things in check. One of those folks was Fred Bates, who along with his wife Jan, were both World War II radar veterans.

Fred and I hit it off right away – we were kindred spirits, and not afraid to take on our landlord. As we got to know Fred and Jan, they learned that we were planning to honeymoon on the east coast and visit a pile of regional museums and heritage sights. Upon hearing this, Fred shared with us photographs and documentation from his and Jan’s experiences during WWII.

Fred and Jan had met on the cliffs of Dover, working on a type of radar station called Oboe.   Jan was the ranking women’s officer – most of the stations in the UK were womened, rather than manned – and Fred was the ranking men’s officer. Everything was top secret, so you weren’t allowed to talk to anyone about your work or fraternize outside your rank. As you can imagine, the two of them spent a lot of time together, which led to their marriage shortly after the war.

Several WWII vets had put together a small museum in Clinton, where many had been trained during the war. However, the museum was closed down due to some interesting financial issues. Fred found out that the materials he and Jan had donated were being stored in an unsafe environment., Fred was pretty upset, given that many of the materials should never have existed at all post-war due to the Secrecy Act, that his history might be destroyed due to carelessness.

So, Fred rounded up 6 of us to form The Secrets of Radar Museum. I took on the chair role, and led the museum through its first 6 years. Fred was a force of nature, and we could certainly understand how he had risen in the ranks during the war. He was simply incapable of taking “no” for an answer, as many of us learned much to our chagrin.

One night, John, our vice-chair and I were tasked by Fred with moving a couch that had been donated to give our veterans a place to sit down at the museum. One of Fred’s neighbours had donated it to the museum on the condition we retrieve it from her apartment. We found a $5 bill tucked in the cushions as we loaded it up into the truck. We were going to return it when we joked that we should have Fred return it instead, and that he would be likely to come back with the dining room suite, as well as the lady’s husband! Fred was just that persuasive. We wondered how we had been suckered into this whole affair – and realized it was, of course, by Fred. We shared a good laugh, returned the $5 and chuckled all the way to the museum.

Our museum was a labour of love, and a race against time. Our vets were all in their 80’s and unfortunately, we lost a few every year. We incorporated in 2001, and managed to get the doors open by 2003. We had taken an idea in Fred’s head, and made it real. At times we wondered if it had been worth all the work, but then special moments of magic would happen. 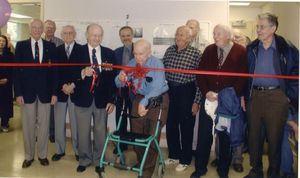 Once, we helped a vet with Alzheimer’s track down his war records to get him into treatment at Parkwood. Another time, we helped 4 children of a deceased veteran learn where their father had been during the war, and what he had worked on. He had died just before the oath of secrecy was lifted, and had never been able to tell it to them himself. We were honoured to be his voice long after his passing.

Running a museum was not without its bumps. Working with an initial budget of just $6000 a year, we survived on volunteer labour until we had raised enough to hire a full-time manager-curator. We had taken over an old lab in the Westminster Ponds area, which originally had been a veteran rehabilitation centre.

In one of those “had I known” life lessons, Jan Bates and I spent long hours working as a team cleaning floors and walls. Jan was quite short, so she scrubbed the floors while I scrubbed the top half of walls and cleaned ceiling tiles. Years later, a visitor who had worked in the lab came in, viewed a room Jan and I had scrubbed for hours and said: “Wow, how on earth did you get the goat’s blood off the floor and wall there?” Jan and I shared a good laugh, and decided that we might skip lunch that day.

I could probably write a book on what it took to get the museum running. Operating a charity is a daunting and difficult task. It’s also one of the most rewarding experiences of my life.

As much as you might think that a place like this receives a pile of government support, the museum, like so many other similar charity organizations, lives primarily on private donations for its survival.

Never forget how important your donation is to the future of a charity. Charities have to work awfully hard just to keep the lights on, and there’s no “magic bullet” for most places that pays the bills. Even organizations with government funding live a precarious existence. Your support, both in the long and short term, is crucial.

I’m pleased to say that our museum is still running. It has gone through some ups and downs over the last two decades, and now exists attached to the 427 Airforce Wing on Crumlin Sideroad here in London.  Fred and Jane are long since passed away, as are so many of my friends who were our radar veterans. I, for one, will never forget them.

If you get a chance this November, please give it a visit, and learn about this amazing piece of history. And never, ever forget that the organizations that you support only thrive because of people like you donating money, time, and expertise. You can find more information at www.secretsofradar.com.

Many thanks to The Secrets of Radar Museum for permission to utilize photos from their archives, and all of those who assisted in the early years, especially my fellow founding board members John Thorpe, Herman Lourier, Sam Newman and Linda Binckly.

Information Provided is intended for residents of the Province of Ontario, Canada. © 2016-2017 Quiet Legacy Planning Group Ltd and Ryan Fraser