An Agent of Good in More Ways than One 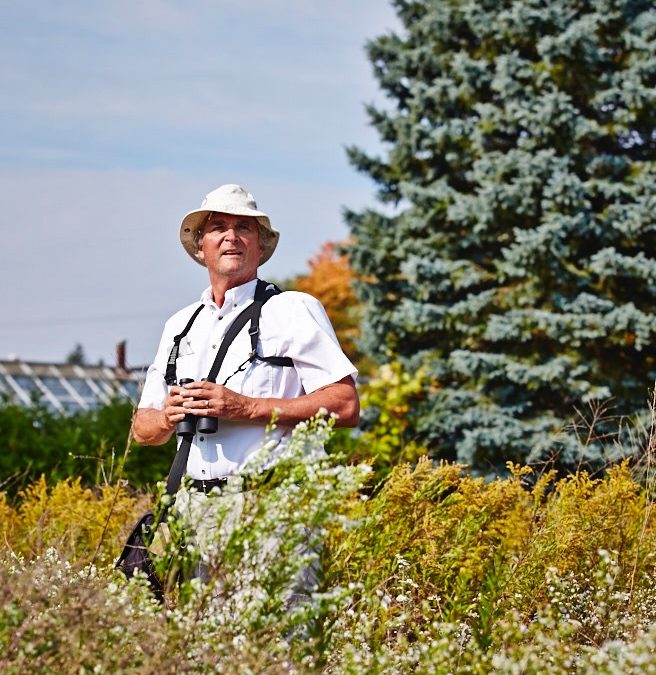 This month, I’m delighted to share with you a unique charitable gift by my friend David (pictured above in his favourite pastime of birding) that reads like a textbook of how to make a fantastic and impactful charity gift. David is well known in the charitable community as “The Godfather of Good”, and still does some work in retirement for the consulting company Agents of Good, when he’s not busy birding and working on his many environmental passions.

A few weeks ago, I received a call from my friend David Love , who is a semi-retired fundraiser. David and I met a number of years ago at a conference on philanthropy in Banff. We hit it off immediately, thanks to our shared passions for community, science, and birding, as well as some very lovely wine at the table we shared as we looked out at the epic view of the Rocky Mountains. Our colleagues we sat with were surprised we hadn’t met before, as we shared so many interests, and both had rather warped senses of humour. Needless to say, we had a fabulous time and we look forward each year to seeing each other at the conference.

Like many professionals in the non-profit community, David’s retirement is more of a “slow-down” than a “full-stop” and he remains active with a variety of contract work and volunteer passion projects in the sector.

David called me, as well as our mutual friend Keith, because he was looking to make a gift to one of his favourite organizations—Birds Canada—and he had a very specific purpose in mind. He wanted our opinions on the best way to achieve his goal. David and his family were contemplating making an in-kind gift of $25,000 from their publicly traded securities with the specific purpose of providing a long-term fund that would fund professional development on fundraising for the organization’s staff.

David knew from his many years of experience that one of the very first budget items to get cut in a charity during difficult times is professional development for staff. He also knew from his experience that the absolute best return-on-investment for an organization is staff development. For an organization to thrive during difficult funding times, it’s essential to have staff up-to-date and well trained.

Originally, David had planned to make the gift an endowment. However, as we discussed, an endowment, while a good idea in theory for a long-term gift comes with some challenges. An endowment is essentially a gift that is retained in perpetuity with the interest used to provide funding to the charity. In the current interest rate environment, however, a $25,000 gift would likely only generate $500-$1000 per year or so in funding, which wouldn’t go very far. Additionally, as time progresses, inflation would eat away at the funds. At some point, the interest on the funds would be tiny and, unfortunately, unless a gift agreement is worded otherwise, the charity would be obligated to keep the fund open and only spend the interest on its stated purpose unless it applied to a judge to overrule the original gift agreement. This is an expensive process and it’s why I normally suggest to charities that endowed gifts should be a minimum of $1,000,000 or more to make it worthwhile to the charity in the long term.

Instead, I suggested to David that he contemplate writing into the gift agreement with the charity that the expenditures from the gift be spread out evenly over ten years and allow the charity to tap into both principal and interest. This allowed him to meet his goal of long-term steady funding but put an “expiration date” for the funds, as to not overly burden the charity in the long term. This would give significantly more yearly budget spending for the staff on professional development rather than simply using the interest on the funds.  David and Birds Canada will work together to encourage other donors to establish their own fund, and the Love Family and Friends Fundraising Education Fund will be open to additional contributions will help extend its impact and lifetime.

Originally, David had planned to make his gift at the end of December. Keith counselled David to make the gift earlier in the year because an in-kind gift of securities can sometimes take two to four weeks to be processed. The in-kind gift process would involve David’s investment advisor, the charity’s investment advisor and both their back-offices’ time to coordinate the transfer. Normally, the donor receives a receipt for the value of the security transferred based on the date the organization receives it. As such, there’s a chance that the transfer may not have settled until the next calendar year, meaning David would lose the chance to use the deduction this year.   Just before this newsletter went out, David emailed to let me know his transfer is now complete, and  the Love Family and Friends Fundraising Education Fund now exists at Birds Canada!

Gifts-in-kind of non-registered publicly traded securities (i.e., not from a TFSA or RRSP/RRIF) are amongst the most tax-effective ways to give in Canada. On top of the charitable tax receipt, you also receive a full waiver of any capital gains tax that would be owing on the disposition of the securities. In order to receive the waiver on the tax, however, you must transfer the securities in-kind to the charity without selling them. It takes more time than a cash gift, but David’s plan to give in-kind is a great way to maximize the tax benefits of his donation.

Most importantly, David’s gift is helping the charity fund operational funding. It’s very hard for a charity to get funding for this kind of thing. Projects, equipment and other “sexier” items are often what donors want to fund, but at the end of the day, a charity needs to keep its lights on and have quality staff in place to meet its mandate. David is one of the rare donors who sees investing in the staff at the charity as an exciting idea. Frankly, we need more people to think like David.

In my experience, the single biggest return on investment for any charity is in its staff. Many charities have massive turnover in staff, as many positions are often contracts due to grant funding. On average, pay at charitable organizations is 30% or more lower than equivalent work in the private sector. I know from my own experience hiring people over the years that staff turnover is one of the single greatest costs to any charity or business organization . Certainly, losing a staff member is by far the most disruptive thing that can happen to any business. David’s gift is going to allow the charity to retain its staff longer and make them far more effective in executing on their programs. In a sense, I think David is expecting that his $25,000 donation will be a multiplier that should allow the charity to get 10 to 20 times or even more back in future donations than he is investing.

There’s a lot we can learn from David’s example. What he has done reads like a checklist of best practices:

David’s clear and open communication back and forth with the charity has resulted in a fantastic gift, with a transparent agreement between the charity and his family on how the funds are to be used. He was open to negotiation and, most importantly, to listening to the needs of the charity.

At the end of the day, David and his family feel great about the impact they are going to have. It has taken a bit more work and thought than required when giving a simple cash gift, but ultimately, everyone is thrilled with the final product. It’s a great story on the power of blending philanthropy with financial planning and thinking creatively outside the box.

I’d like to thank David for being willing to share his story. He and I both hope that you are inspired to think differently and creatively about your own gifts and the impact that you can have with a little bit of extra work and planning.

PS – We’ve just updated the Quiet Legacy Website!  We’d love any feedback you might have.  Drop me a line at ryan@quietlegacy.com