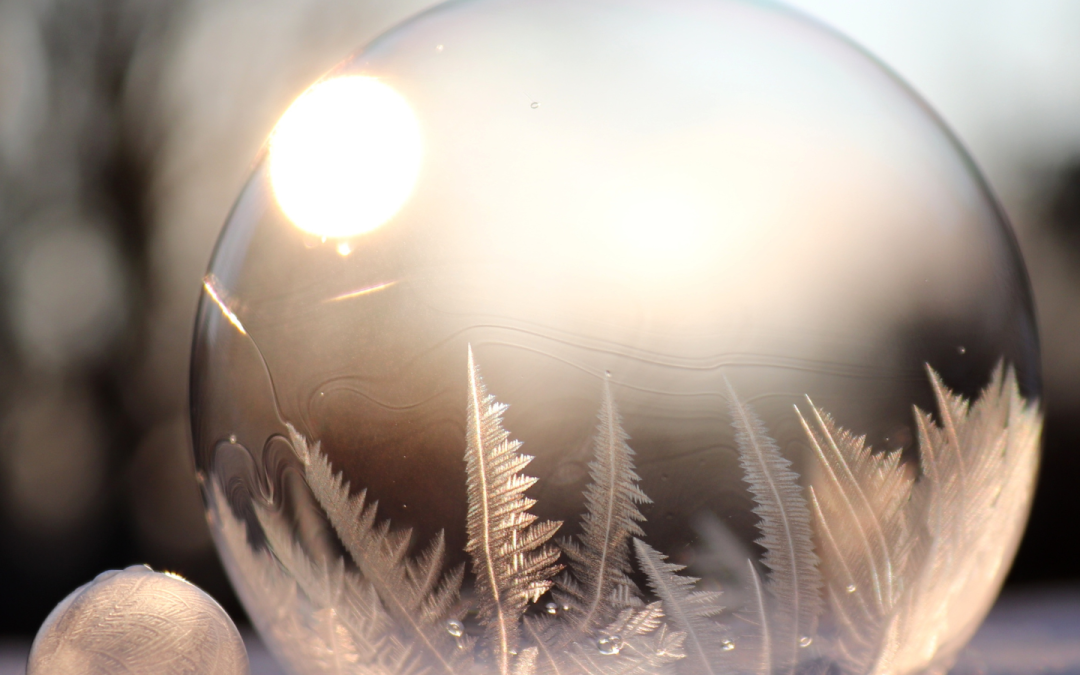 I don’t know about you, but when I was around 6 years old, there was simply no greater joy in life than blowing bubbles. My birthday is in the heat of the summer, and inevitably, someone would give me a bubble wand and solution, and my life was complete. To this day, I can taste the sweet combination of glycerin and soap on my lips, and feel the ring of the oh-so-special bubble wand, and its rippled edges on my mouth.

It’s a miracle that I, and every young kid didn’t want to play the trumpet or another brass instrument. Can you imagine the size of the bubbles those would have produced?

In the height of the lockdown at this time last year, I remembered my childhood love, and decided that I needed to photograph something new and interesting – bubbles as they freeze. It turned out to be one of the most fun (and freezing things), I’ve ever done, as you can see in the picture above. I was a child again – albeit one with a tiny amount of frostbite on my fingers. It was the perfect thing to brighten my day.

In my day job, as a Financial Planner, however, bubbles are a vaguely terrifying topic. Far from being fun, they can be our worst nightmare:  clients want to ride them up, but definitely not on the way down. Additionally, when crazy things happen in any kind of financial space, figuring out the value of just about anything becomes impossible. The human race seems forever stuck on a pendulum, alternating between greed, and fear.

January, as many will know, brought with it some questioning by prominent analysts into the high recent valuations in several markets, including real estate and cryptocurrencies. I thought for our February blog, it might be fun to see what history teaches us that might be relevant to our investment decisions in the here-and-now.

I’ve mentioned before that one of my favourite financial reads of all time is Niall Ferguson’s The Ascent of Money, which was published in 2007, just as the financial crisis was hitting its stride. Unlike most commentary on financial markets, Ferguson’s book goes back almost 1000 years, to look at money and finance across recent human history. The learnings are plentiful, painful, and insightful.

Bubbles, according to Ferguson, follow a repeatable, predictable pattern throughout history:

Unfortunately, history shows that it is often hard for people swept up in a bubble (particularly in the mania phase) to realize that they are in a bubble until it is too late. This is particularly true for “Do it yourself” investors, historically, as professionals who manage billions of dollars daily often have faster, better and more useful data to work with. They also, usually, have a strong level of self-discipline.

The world’s most ridiculous bubble

In the last 1000 years, no bubble has probably been more ridiculous in retrospect than the Dutch Tulip bubble of 1636-1637. In the early 1600’s, tulips became a luxury item, coveted by the wealthy for their rich, saturated colours. Originally a central Asian flower, as trade routes opened up, the flower became more and more desirable. In the Netherlands, the popularity of the flower grew with the establishment of the Dutch East India company (the world’s first known stock-traded company), which provided a steady flow of trade between Asia and the Netherlands.

By 1636 tulips were being traded at a number of exchanges in Dutch towns, and prices were reaching ridiculous rates, especially for rare or unusual bulbs as the Mania phase of the bubble set in. A single bulb of the “viceroy” variety of tulip was documented to have sold for 2500 Dutch Florins – the inflation adjusted-equivalent in today’s dollars of just over $48,000 Canadian funds. (The average skilled craftworker at the time earned 300 Florins a year!)

To put things in perspective, 2500 florins could buy you all of the following in 1636:

Some historical records suggest that at its peak, a few greedy individuals paid 2-4 times higher than even this amount for a single bulb of a different variety – a staggering amount indeed.

As you can imagine, things didn’t end well for the poor folks who spent that kind of coin on a tulip. The Viceroy breed, based on my research seems to have disappeared into the annals of history, but, in my research for this newsletter, I can report that a similar-appearing modern “luxury” variety runs for $8 a bulb. That would be a 99.98% loss on investment for the poor investor who paid 2500 Florins nearly 400 years ago.

Learning as a modern investor

Tulip Mania, and the many, many other bubbles in history can provide us with a lot of wisdom when making decisions about our investments in modern times. Here are the big questions I think everyone should ask themselves, that would have helped our Dutch friends back in 1637:

At the end of the day, history is filled with fortunes won and lost by speculation. That isn’t investing – its gambling. While the human brain can enjoy the rush of hormones that come from gambling, I think we can all agree that losing is a very different, and highly unpleasant feeling. It is important to keep our emotions in cheque when bubbles appear to be happening, which can be very challenging, especially if we don’t know if we are in the midst of a bubble or not. Usually by the time everyone agrees, it is far too late for anyone still trapped in the bubble.

This is why I am a huge fan of having professionals running investments in the vast majority of situations – people who are disciplined and have the ability to dig into an investment and ask the right kinds of questions, and systematic processes in place to determine if a valuation of an investment is accurate relative to circumstances.

My photo-bubbles were super fun, but like all bubbles, they eventually popped. When they did, the results were spectacular for my photos, but in investing terms, a popped bubble is a painful event. In real life, I’d much rather have an investment grow, deflate a bit, and then grow again, and repeat that cycle, than experience massive growth, get to big, and then blow up completely.

Just remember, on the “up side” of a bubble everyone makes money – the real skill is to know how to handle the downside, and that is a job best left to professionals. Money, unlike soap or glycerin, doesn’t taste so sweet on the lips after the bubble pops!