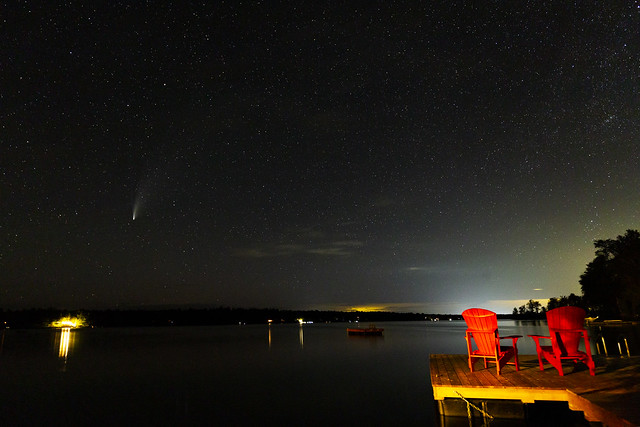 When you openly embrace curiosity and learning, while exploring the world around you, your legacy will find you naturally

As most long-time readers probably know, I’m an avid astronomer and astrophotographer. During the last few weeks, I’ve been in astro-heaven, as one of the best comets of my lifetime has been gracing our skies at dawn and dusk. Our new visitor, Comet c/2020 F3 NEOWISE, made its closest approach to the sun at the beginning of July and is now on its way back to the nether regions of the solar system. If you missed it, don’t worry, it should circle back in another 6800 years!

For thousands of years, people have seen comets as predictors of the future, or major changes, or times of strife. On the more grosser side, to the Norse, comets were falling bits of the giant Ymir’s skull, which was held in the skies by four dwarves above the earth. “Celestial dandruff”, so to speak. I suppose given that the development of anti-dandruff shampoo was centuries away, their theory was as good a guess as any…

In the year 1066, a comet was believed to have portended the death of King Harold at the battle of Hastings. Greek and Indian astronomers, however, centuries before, had theorized (correctly!) that comets were celestial bodies that appeared periodically. Europe would finally catch up on the science of comets when Newton’s theory of gravity was used by Sir Edmond Halley in the early 1700s to predict the future arrival date of world’s most famous returning comet.  Halley’s comet, as it is now known, turned out to be the comet seen at the battle of Hastings. We will see it on its next loop back around 2061. (If you are impatient, however, you can see bits of Halley’s comets every May during the Eta Aquariid meteor shower or the Orionid meteor shower in October as the earth passes through its debris trail.)

Edmond Halley was a fascinating person – he began his career captivated by the moon and, as a contemporary of Newton’s, he was also fascinated by gravity, which led him to study comets. Remarkably, Halley became the publisher of Newton’s Philosophiae Naturalis Principia Mathematica in 1687, which was probably one of the most renowned scientific publications in history.

Beyond his comet interests, he was an inventor. Along with designing an early model of the magnetic compass, Halley also invented a diving bell which used leather tubes and lead-lined barrels to supply fresh air under water. Ironically, one of his other little-known legacies was becoming one of the very first known people to suffer middle-ear trauma from staying underwater for long periods.

On the financial side, in 1693, he also published an article on life annuities and was one of the earliest people to work on actuarial science, the bedrock of the life insurance and pension industries.  (See, astronomy and financial planning are connected if you go back far enough – be still my geeky heart!)

Halley died at the ripe age of 86 in 1742, a remarkable achievement for that era. I think we can certainly state that he went out on the “Long Tail” of his actuarial predictions.

Halley is a fascinating person on so many levels and he’s largely remembered through legacy of the comet he predicted would return every 76 years. His life story is a good reminder to all of us, that a life filled with discovery and variety is a life that is more apt to be remembered through time and history than one without. Rather than fearing comets, as many of his time did, he embraced them with interest, intrigue, and a need to understand them better, as was true of his many other pursuits.

There’s a strong lesson on legacy for you and me in Halley’s life, especially during the year of uncertainty and chaos we’re living through. When you openly embrace curiosity and learning, while exploring the world around you, your legacy will find you naturally. I am certain that had Halley given into fear, his remarkable achievements would never have happened and humanity would have been the poorer for it.

On a more practical level, I can’t help but think there is a lesson in longevity we can learn from Halley, as well. In my nearly two decades of work as a financial planner, I have worked with many long-lived individuals like Halley. In every single case, the octogenarians, nonagenarians and centenarians I have spent time with all have shared Halley’s passion for learning and were willing to put their fears aside to try new things. Those who retain their childhood curiosity about the world around them seem to live the longest.

Halley, despite his lengthy lifespan, passed away before he would see his prediction fulfilled, as his comet did not return until 1758, when he would have been 102 years old. When it did return – in its usual spectacular fashion on Christmas night that year –  his place in history was forever preserved. He knew he wouldn’t live to see it, but wrote that “If it should return, according to our predictions, impartial posterity will not refuse to acknowledge that this was first discovered by an Englishman.”

That was a legacy request I think we can safely say is forever fulfilled.