How Batman, Anthrax and politics all led to a terrific gift for a library 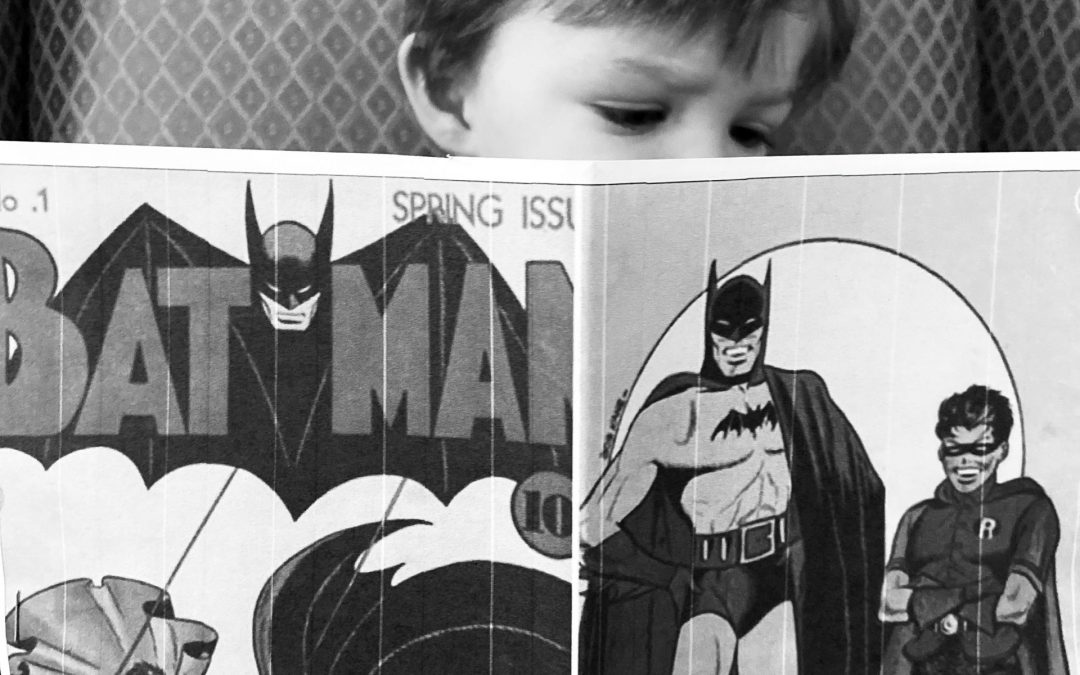 Everyone once in a while I run into a story about someone I haven’t met that just resonates with my inner nerd in a way I can’t describe. This month, I’d like to share with you one such story about a young man who grew up to turn his childhood passion into something lovely for a children’s library. I’ve tried not to be too cheeky, but I too as a kid loved Batman, and this story has brought a much needed smile to my face as I wrote every word of this month’s blog.

Our boy wonder, young master Patrick was born on the last day of March, 1940, in the early days of World War II in Montpellier, Vermont. From birth he was nearly completely blind in his left eye, but that did not stop his passion for reading, which was heartily encouraged by his parents.

Much of his time as a young child involved sitting in his local branch of the Kellogg-Hubbard library in Montpellier,  after receiving his first library card at the tender age of four. The library was a magical, wonderful place for him, and it wasn’t long before he found himself in the comics aisle. And there – KAPOW!- he discovered one of his great loves of his life, Batman.

Ironically, Batman’s first appearance in the comics was in 1939 – making Batman himself Patrick’s senior by only a year. While his friends preferred Superman, Patrick found something appealing and comforting in Batman’s complete lack of superpowers – his only superpower was the use of his brain, and his detective skills. To Patrick, Batman felt “real”, in that he had the same human frailties that we all face. As a young boy, with his own physical limitations, the caped crusader was a natural hero to Patrick.

Inspired and impassioned by his love of reading and Batman, Patrick would go on to attend law school in his twenties, and eventually joined a law firm headed by the future governor of Vermont. Knowing Patrick’s passion for justice, the governor would eventually nominate Patrick to become State’s Attorney. Inspired by his passion for justice and crime-solving, Patrick would go on to mastermind a sting operation in the early 1970s that resulted in the arrest of a “dirty cop,” who was abusing his position. ZONKS!  Bruce Wayne would have been proud indeed of his detective skills.

A short while later, Patrick was elected to the US Senate, as a senator for Vermont, where he has remained in office since 1974. Again, perhaps once again inspired by his childhood hero, he became one of the lead American’s promoting the Ottawa Process (a treaty) for the international banning of landmines and was the lead sponsor of the bill introduced in the US senate to sign onto the treaty. As part of the campaign to drum up support, Senator Patrick brought his life full circle and engaged with D.C. comics to help create “Batman: Death of Innocents: The Horror of Landmines”, which was a graphic novel showing the many problems created by landmines around the world. Patrick put a copy in the office of every single on of his colleagues in the Senate, and some colleagues said that reading the comic swayed them to support the treaty. In the end, the vote was 100-0 in favour of the ban, an almost unimaginable unanimous consent in light of today’s very partisan divisions.

Patrick’s connections to DC comics had begun a few years earlier, when he was deeply involved in some US copyright law act changes. During the legislative hearings, a representative from DC Comics was discussing the act with Patrick and made a reference to Batman. As it turned out, the DC Comics representative made a mistake in his reference – which Patrick pointed out, correcting him right down the very page of the comic in question. DC checked their archives, and indeed – POW!-  Patrick knew his Batman far better than even the company producing the comics. From there, a collaboration was born.

Patrick would end up being invited to write the forward to several Batman anthologies and had numerous cameos in a total of five Batman movies, including one where he played a US Senator. The most memorable scene of all, however, was in tandem with Heath Ledger, who’s final brilliant performance as the Joker will be long remembered in The Dark Knight. In this scene, Patrick plays an old man who stands up to the Joker saying “We won’t be intimidated by you thugs!”. The Joker grabs him by the face, and threatens to cut him with a knife. Patrick would go on record as saying he didn’t need any acting skills to appear terrified as Ledger approaching him with ferocity, playing the evil nemesis of Batman’s most feared opponent. His most recent collaboration was to pen the forward to the 80th anniversary of Batman coffee-table book produced by DC Comics last year.

Patrick earned a fairly sizeable amount of money for his work with DC in film and print – and decided to donate 100% of it back to children’s section of the Kellogg-Hubbard library system that had meant so much to him as a child. Over the years he has given several hundred thousand dollars from his acting and writing work back to the very institution that inspired him to read as a child. Patrick felt that he had a huge debt he owed to the library system that needed suitable repayment – and this seemed like the perfect way to do so, and to him, he hoped that his love of reading (and crime fighting!) would pass on to future generations.

Patrick is a prime example of what we call a “repayer” type donor – someone who has engaged in charitable gifts to pay back to a cause or institution that changed their own life at a younger age. Of all the different types of people who give, I’ve often found that repayers like Patrick are the most likely to want to give from their estate, with the intent that others should benefit in the same way. While Patrick hasn’t gone on record indicating he’s made a gift in his estate to the Library, I would be shocked if he hasn’t.

Patrick’s own life has been filled with some (far too) exciting adventures – including being one of two senators sent an anthrax-laced letter in 2001, just days after the 911 attacks. At the time, he was the head of the senate Judiciary committee, and it was suspected that he was targeted specifically due to his position. Patrick’s life was spared as the sender has put the wrong postal code, and a postal worker, David Hose, ended up being exposed to the anthrax instead. He was one of the fortunate few who survived, however, he endured significant after effects. Patrick would go on to introduce legislation to allow the anthrax attack victims to access the same benefits as 9/11 survivors.

A few weeks ago, Patrick publicly summed up his thoughts on giving and was quoted in a number of news outlets, saying that as a member of congress, “You have a comfortable life – what are you doing for others”? I find it reassuring in this age of political strife, that there is at least on political figure who has taken it upon himself to view philanthropy and giving as a core personal value. My inner nerd rejoices that much of his inspiration came from the same comic books that inspired me as a child as well.

Today, Senator Patrick Leahy, aged 80, and still a super bat-fan , still serves in US senate after 46 years in the role of “President Pro Tempore”, a title traditionally given to the longest serving senator. The President Pro Tempore has one very vital and important constitutional duty, which is to preside over the senate in the absence of the Vice President. And, oh yes, one other job that pops up from time to time: to preside over impeachment trials for anyone other than a sitting president. You may have seen of Patrick on TV recently, even if you’ve never watched any Batman. His latest appearance was a zinger for sure…

We’ll look forward to seeing you at the same bat-time, on this same bat-channel in April!

Ryan (and just maybe a little bit of his inner child…)