My friend Haydn, the Gift of Art 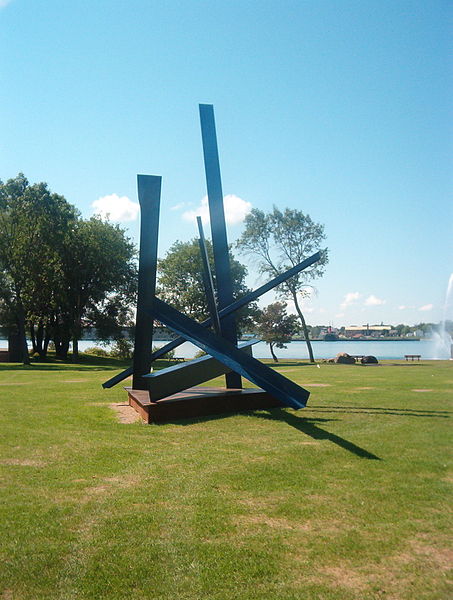 We all meet remarkable people in our lives.  One of the most remarkable I’ve ever met was my friend the sculptor Haydn Llewlyn Davies, the creator of “Algoma Blue”, the sculpture pictured above, which lies at the heart of this month’s newsletter.

As you may know if you’ve been a long-time reader, I’m quite fond of the arts.  My wife Bridget and I met the first day of music school and my first career was as a professional classical saxophone player.  I toured up and down the eastern seaboard of Canada and the U.S. performing as guest soloist with orchestras.  It was a great gig in my twenties, but I learned quickly that the price of such a career was being away from my spouse and children far more than I was comfortable with.  Hence, almost twenty years ago, I retrained as a Financial Planner.
Given my background, it might surprise you to know that in Kindergarten, I failed both music and art – the long-standing joke is that I’ve only managed to improve one of those two categories. (If you’re a client of ours, then you can probably attest to my horrible sketches that I use to explain financial concepts.)  Fortunately, I quite enjoy photography which has let me maintain an artistic outlet.  That said, the fine arts hold a special place in my heart thanks to a dear friend, for whom our youngest son is named, Haydn Llewellyn Davies.

Fifteen years ago, I became great friends with Haydn, a wonderful Canadian sculptor.  Haydn and I met through The Secrets of Radar Museum, where I was then president, and he was one of our veterans.  He had been recruited into radar during the Second World War after finishing his degree at the Royal College of Art.  After the war, he had a successful career in advertising, and retired early to return to his first love of art in his mid fifties.  We bonded instantly, having shared a deeply similar background of crossing both the business and artistic worlds during our careers.   (You can read his impressive obituary run by the CBC in 2008 by clicking here.)
One of my fondest memories was touring Haydn through the magnificent art collection at London Life’s head office where we stumbled across a painting by a dear friend of his.  The painting was of Marilyn Bell, the first woman to cross Lake Ontario swimming.  Haydn’s friend William Davies (no relation) had painted the picture and sold it to Prudential Insurance years before and had no idea where it had ended up – in fact, when London Life bought Prudential, it had come into their collection.  Haydn was thrilled to be able to call Bill and let him know what had become of his work and that it was still on display.
Haydn was a remarkable man, quick of wit, and always with a huge smile.  From him I learned much about business, art and finding your way in life with one foot in both fields.  He was also the first person to introduce me to the fact that CRA has special rules in place for the donation of Culturally Sensitive Property, such as artwork to charities.

When I first met Haydn 15 years ago , he was waiting to hear back on having one of his pieces of artwork, (known as  Algoma Blue) designated by the Canadian Cultural Property Export Review Board (CCPERB).   This designation allows artwork to be donated to a qualified charity recognized by CRA as being able to properly preserve and conserve culturally significant property, such as art.  (CRA maintains a publicly accessible list of which Charities are currently eligible –not every charity is able to qualify for the extra tax waiver on culturally sensitive property!) More importantly, for the donor, it gives them a complete waiver of any capital gains tax on the gift – which normally would be owed to CRA at the time of disposition.
The piece had been installed at Queen’s Quay on Toronto’s Harbourfront for many years and was well known by many.  To the best of my knowledge, at the time we met, the sculpture’s ownership had reverted to Haydn due to renovations at Harbourfront.
Once the designation of Algoma Blue as culturally sensitive property was received, Haydn was able to donate the piece to the Algoma Art Gallery and take advantage of the capital gains tax waiver. It was a great opportunity to have a key piece of Canadian art stay in Canada, and most importantly, be gifted to an organization that could properly preserve the sculpture, which had strong ties to the Sault Ste. Marie steel industry.
This waivers on in-kind gifts enjoyed by my friend Haydn apply to other gifts as well – the most important one being gifts of Publicly Traded Securities (PTS).  While you may not own artwork, odds are high that your non-registered portfolio may include items that qualify as a PTS gift.

Any donation of artwork or Publicly Traded Securities require careful planning.  In some cases, the Fair Market Value (FMV) of the artwork can be quite significant.  While alive, you can only use charitable donations up to 75% of your current annual income or 100% in the year of death or prior year.  (This restriction can be significant, since the Capital Gains tax exemption on in-kind gifts means the gain won’t flow into your income in the year of donation – a double edged sword!)  Residual charitable tax credits can be carried forward for up to 5 years against future taxes – if you make a gift of significant value, it’s important to look at how you might be able to maximize the gift.   Be sure to engage your tax, investment and legal advisors to get good advice so you can fully utilize the value of your gift.

A legacy beyond art

Beyond his legacy of artwork, Haydn also holds an important place in Canadian history.  While in the hospital, one of his earliest and most famous works, Homage was destroyed by Lambton College.  It became the subject of a lawsuit that hit headlines across Canada that was not settled until after his death.  The suit brought forward important issues around the rights and obligations to preserve historic cultural property and caused donors around the country to look at gift agreements for future gifts of artwork that would ensure that publicly displayed works of art would not meet a similar fate.
For me, I will always treasure our many conversations, and I’m pleased to say that as my youngest son Haydn grows up, he shares the same mischievous smile and twinkle in his eyes.