The house that accidentally ate an estate and started a charity 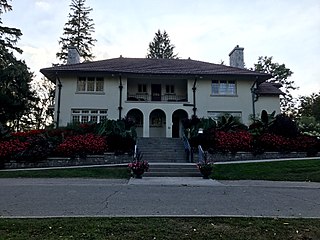 April is always a month of change and renewal, but this April took on a special significance for millions of people around the world, as fire engulfed one of the great landmarks of Europe, Notre Dame Cathedral. At almost 1000 years old, its legacy now extends vastly beyond its intended use as a place of worship. It has become, in many ways a symbol of Paris, the Middle Ages, and as a centre of arts, architecture and music. There are only a few dozen architectural monuments in human history to hold such high recognition – it stands amongst The Great Pyramids, the Great Wall and Stonehenge as one of the ancient monuments to stand the passage of time.

As Notre Dame burnt, I thought of one of our locally significant buildings, the Elsie Perrin Williams Estate. At a “young” 102 years old, Elsie’s Estate has a complex and fascinating history as a textbook example of an estate planning gone unexpectedly wrong.

The story behind the gift of the estate to the City of London,  is of particular interest to me, as I have a long-time interest in History, having been founding President of The Secrets of Radar Museum, and a past board member of the London Heritage Council, as well as its predecessor, Landmarks London.

Elsie, and her estate

Elsie Perrin Williams was the daughter of Daniel Perrin, who was a wealthy business owner here in London at the turn of the century who made his fortune selling biscuits and confectionaries. He passed away in 1908, and left his fortune in trust for his Wife and his Daughter Elsie. Elsie was married in 1905 (a few years prior to Daniel’s death) to Dr. Hadley Williams, who was a lecturer in the Medical school at Western. Her father gifted them the family summer retreat known as “Windermere” where Elsie spent her childhood summers. In 1917, Elsie and Hadley built the house which still stands today on the property, in the style of Spanish villas they had seen in Europe. The extensive grounds had a golf course, a cottage for the servants, and eventually, even consecrated ground where Hadley and Elsie lie to this day.

After Hadley’s death, Elsie became reclusive, and isolated. During this time, her main companion was her maid Harriet Corbett, with whom she became close friends in the years after the loss of Hadley. Hadley’s companionship so important to Elsie, and so she generously made arrangements at her death  to look after Harriet in her will. Elsie passed away in June 1934 at the age of 58.

In her will, Elsie had decided to gift the house and property to the City of London for use as a public park and museum, but with a provision that Harriet would have the right to live in the house with a paid servant and a stipend until she wished to leave, or died. A significant amount of money was left in trust for the care of the property, as well as the care of Harriett. Harriet would live at Windermere until she died at age 84, in 1979, and ironically, spent more years living there than Elsie Perrin Williams had herself.

The reading of Elsie’s will was contentious: She had added a number of codicils shortly before her death to give more and more to Harriet, at the expense of her extended family, as well as the Ursuline order of Brescia, to whom she had previously promised estate gifts. Allegations of undue influence and capacity were made, and numerous court challenges progressed.

Eventually, the city decided it wanted access to some of the funds set in trust, and arranged in 1938 for the Ontario Government to pass an Act of Parliament to break the terms of Elsie’s will, and obtain $580,000 of the $1.3 million set aside for the care of the property. These funds were used to build part of Victoria Hospital, as well as the Old Central Library building on Queen’s Avenue. Another $100,000 was given to the Ursuline Sisters at the same time, leaving slightly less than half the funds available to maintain the estate. In todays dollars, the amounts redirected from her estate by the Ontario Government would be approximately $11.8 Million!

As a result, by the time of Harriet’s death, there was very little left in Elsie’s estate to pay for the upkeep of the house and grounds, and there were concerns that the property may fall into a state of disrepair, just as it was finally being turned over to the city.

Just after Harriet’s death, a group of concerned local citizens formed the Heritage London Foundation (HLF) to preserve the property, and others like it around the city, and took over management of Elsie’s estate in 1981…making the estate largely what it is today. Today, the Heritage London Foundation still manages the estate on behalf of the city, as well as Grosvenor Lodge. In 2017, then president of the foundation, Susan Bentley wrote a wonderful book called Elsie’s Estate that delves more fully into the fascinating background of the property and its past owners. Susan was kind enough to chat with me while I was prepping this article, and I wish to publicly acknowledge her tremendous effort put into the book, as well as the time she spent chatting with me in person.

Lessons for our own planning

Elsie’s gift was generous on many levels, and it’s a shame that it ended up being a legacy with so much litigation and contention, and even interference by the Ontario Government. In 1938, I doubt that Elsie expected that Harriet would have survived to live to such an elderly age, and I would imagine she would have been mortified to see the political and family interference in her estate.

When doing your own planning, its important to work with your lawyer and other advisors to ensure your wishes will be followed, so that your estate won’t be challenged like Elsie’s was. In most situations that I have seen, it is also best to limit any terms and conditions to shorter time periods, so your estate doesn’t have a greater lifespan than you did.

So, next time you take a walk at the Elsie Perrin William’s estate, visit Victoria hospital, or drive past the old Central Library – ask your self if its time to review your own estate plans.